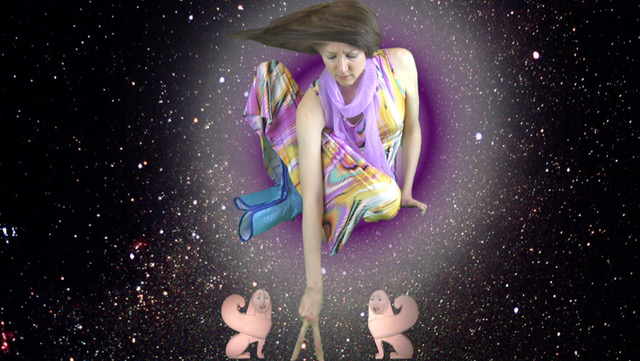 In 2002, Shana Moulton started the series Whispering Pines about her alter ego: naive hypochondriac housewife Cynthia. In a psychedelic universe Cynthia is constantly looking for happiness and health. Cure Park features This organ wants this, that organ wants that, a combination of performance and video art. With the aid of props such as lava lamps and commercial jingles Cynthia tries to harmonize her organs. During these attempts seemingly mundane objects such as electric blankets, humidifiers and Crystal Light soft drinks act as portals into Cynthia’s subconscious, where she starts a quest for self-actualization through extensive hallucinatory sequences.

In Shana Moulton’s videos and installations wellness, health and beauty products, mostly aimed at women, and decorative and useless household products act as protagonists and props. She focuses on the urge to improve yourself and the promises of consumer culture and contemporary belief systems, including esoteric movements, responding to that urge.

Through her performances, videos, and installations, Shana Moulton (US, 1976) creates worlds at the threshold of absurdity and truth, catharsis and cliché, the material and the spiritual. From 2004 until 2006 Moulton studied at De Ateliers in Amsterdam. Her solo exhibitions have travelled all over the world, including places such as Nieuwe Vide in Haarlem, Palais de Tokyo in Paris, Kunsthaus Glarus in Switzerland and MOCA Cleveland. She lives and works in New York and California.